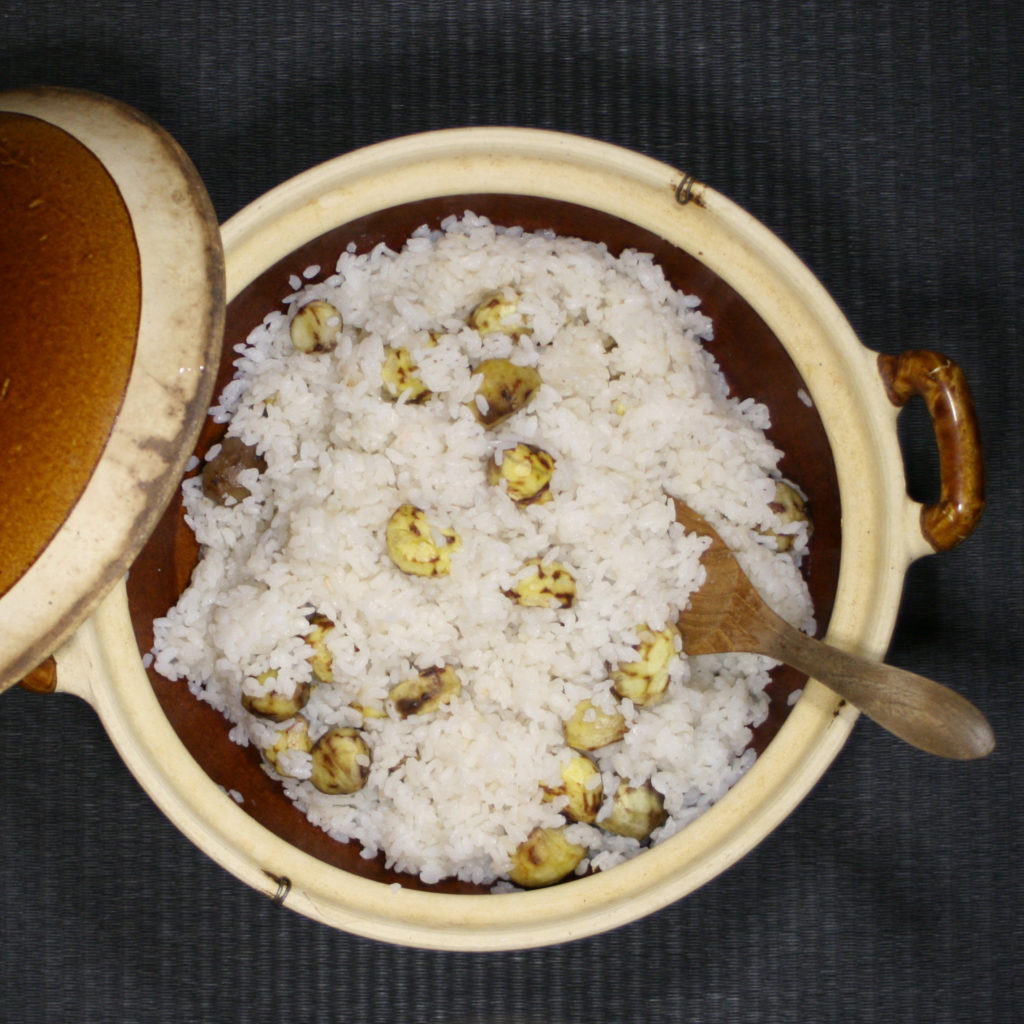 To be honest, I never liked KURI GOHAN or chestnut rice, simply because I never really liked sweetness associated with savory meals. Plus, it was never rewarding after all that hard work of peeling chestnuts until one day, I had some chestnut rice at one of my favorite Japanese restaurants, SHIKIHA KAISEKI YOSHIHITO in Ishikawacho (Yokohama), that turned my world around. I ordered a course menu so I had no choice, but his chestnut rice was far beyond my expectation. Yes, I know he uses the best ingredients, but it wasn’t just that, there had to be some other secret to it. I wasn’t really sure what it was that made such a big difference until I realized it was the taste of the chestnut itself. I noticed the chestnut had a flavor of salt to it, which made the chestnut even tastier.

But I knew, just adding salt when cooking the rice was not going to be enough, rather, that was how I normally cooked anyway. And so I figured, applying some salt and letting the chestnuts sit for a while BEFORE cooking them would do the trick, and it did!!!!! They are not as beautiful as the chestnut rice at SHIKIHA, and I may be completely off, but at least I believe it was close enough!!

And so, here’s the recipe to MY BEST EVER CHESTNUT RICE (tada—–!)

BTW, I went back to SHIKIHA the other day and they happened to serve their chestnut rice (they change menu’s every month so I was lucky!). Same as before, it was sooooo delicious and I know I can never beat that taste, but mine’s good enough too!!!  Give it a try! (Peeling chestnuts are a lot of hard work, so you can always go with the peeled ones too)

+ A LITTLE SOMETHING ABOUT JAPAN +

+ KURI GOHAN / chestnut rice +
Chestnuts, as I believe they are in other countries too, are a very typical Autumn food ingredient in Japan. It’s “Shun” or the good season here are around September to October, but in some supermarkets, you may be able to find them as early as late August to as late as November.

Chestnuts are strongly associated to our Autumn season in Japan and it can probably be said that most of us Japanese enjoy chestnuts as chestnut rice; a very commonly eaten Autumn dish in Japan.

You can shop everything you need from below to create the recipe in your kitchen.
You can find the links to the more commonly used, more widely available food ingredients here but if you wish for something organic or more authentic, please refer to “About Ingredients” page.

NB: As chestnuts are seasonal food (Autumn season in Japan), please understand that the fresh chestnuts are not available throughout the year.