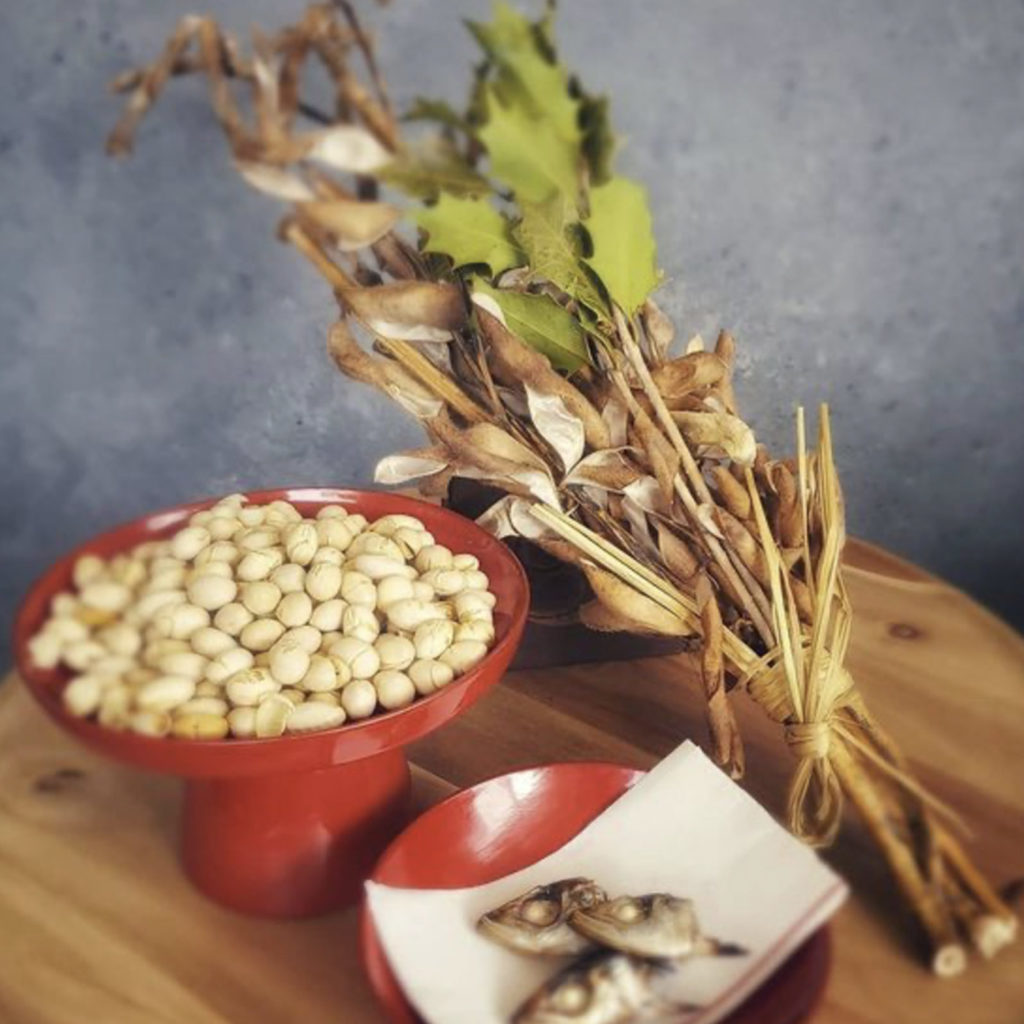 Today (Feb 2) is SETSU BUN, the last day of winter. SETSU BUN normally falls on the 3rd of February, but can be on the 2nd or 4th of February since the date is calculated based on our old lunar calendar, which counts 365.2422 days in a year, resulting in slight change of dates depending on the year. This year marks the first time in 124 years since 1897, for the SETSUBUN to fall on the 2nd of February!

As in its literal meaning “SETSU節”= season(al) and “BUN 分”=division, SESTU BUN originally marked the day before the change of our four seasons and so, we have four SESTU BUN’s in a year.  However today, we specifically refer to the last day of winter (a day before spring), since the spring SETSU BUN being the New Year’s Eve on the lunar calendar, was considered to be most important among the four.

Because bad vibes are said to occur on the change of seasons, a special ritual is performed to cleanse away all the evil spirit for the coming new year; this ritual is the MAME MAKI (“MAME豆”=bean, “MAKIまき”=throwing) event.  Roasted soy beans are thrown out the door, or at a family member wearing an “ONI鬼＝demon” mask, while shouting “ONI WA SOTO! (Demons out!), “FUKU WA UCHI! (Good luck in!).  The beans are thought to purify the house by driving away evil spirits, and for that reason, we eat the same number of soy beans as our age (Nope!! I only eat a few since I can never finish so much beans!!) to bring in good luck.

I also put up some traditional SETSU BUN decoration with the things that are said to scare the bad demons away; a holy tree leaf that pokes their eyes, and grilled sardine heads that are said to disgust the demons.

We also have another SETSU BUN ritual, which is the eating of EHO MAKI (“EHO恵方=direction of good luck, “MAKI巻き=roll).  While regular rolled sushi’s are cut into bite-size pieces, EHO MAKI’s are not cut but eaten as a whole, since slicing indicates cutting off a relationship/good fortune.  It is eaten on the night of SETU BUN, facing the direction of good luck (which changes every year and this year’s “EHO=direction of good luck” is south south east), and you are not to say a word until you finish the whole roll (which always makes our kids giggle!).)

I’ve normally made EHO MAKI’s using a lot of seafood but this year, to make our life easier, both cooking and eating, I’ve decided to make some Kimpa (Korean rolled sushi’s)
Now off to cooking!!

Wa +Sabi is a real life guidebook to life in Japan, our cooking, tradition and culture.
Come and discover that little something to spice up your life!

Found a little visitor sleeping in our field. Hop

Getting ready for today's cooking lesson! This mon